Wow, just caught this over at Real Clear Politics:

What you didn't see reported by the "journalists with real names" is that the day after Kerry appeared on Meet the Press and called for "those who have challenged me" to release their records, John O'Neill executed a Form 180 and released it to the media authorizing the "total voluntary release of all records to anyone interested" (click here to enlarge image).

Thanks to Polipundit for the Form 180 counter shown at the top. RealClearPolitics has more.
- Pat, 1:44 PM 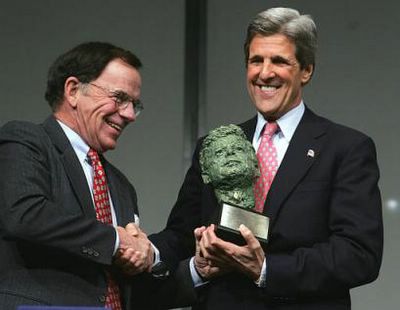 Caption this photo over at Brainster's, and just like John Kerry, you could win a major award!
- Pat, 9:15 AM

One of my favorite posts at Kerry Haters during the election season was when I saw that Lucianne.Com, the indispensible political website, had asked its readers not to donate to the upkeep of that site, but to send more money to the Swift Boat Veterans for Truth. As you doubtlessly know, the Swiftees were in many ways the heroes of the 2004 election, and Lucianne's amazing website undeniably helped lift their boats a little higher.

Well, it's time to donate to Lucianne.Com. Without Lucianne.com Kerry Haters and Brainster's would never have existed. There is no greater blog in the world than Lucianne; it is truly a unique and amazing place.

As always, I pledge to you that I have donated myself when I ask you to donate to somebody else, (as I did with the Swiftees and John Thune last year at KH).
- Pat, 11:37 PM

Happy Bloggiversary to Us!