One of My Faves 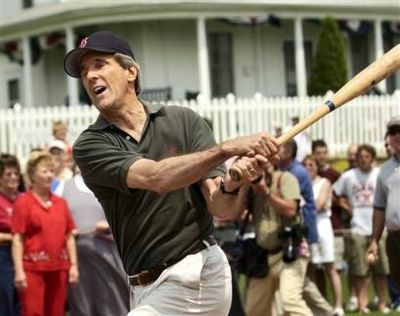 Note the closed eyes and the interlocking grip. John Kerry, man of the people!
- Pat, 10:18 PM

Actually it sounds like Vanessa Kerry (the younger one who didn't show off her boobs) is serious about running the Boston Marathon, unlike her dad, who just liked to brag that he'd done it.

Our buddy John Ruberry, who broke the story of Kerry's lie about having run the course in the late 1970s has the details.
- Pat, 5:42 PM

That's what the folks who backed George Butler's film of John Kerry are claiming.

The federal lawsuit filed Monday says brothers Marc Abrams and Russell Abrams were misled into thinking that George Butler, a longtime Kerry friend, and the film's producers were trying to make a commercially successful film.

When you look at the relative sales of, say, Tour of Duty, and Unfit for Command, it's not hard to figure out how Butler could have made a profitable film.

She's gone back to being just Teresa Heinz.

"I just checked, and she no longer uses her [entire] last name; only during the [presidential] campaign did she use Kerry," the council's Tamara Rodriguez Reichberg told Inside the Beltway upon our inquiry.