He Would Have Been Kerry's Secretary of State

Senator Joseph Biden said that even if Iran was a full democracy like India, it would want nuclear capability, like India. What the world needed to address was Iran's emotional needs, he said, with a nonaggression pact.

Patrick Hynes of the Ankle-Biting Pundits has an absolutely brilliant column over at the Am Spec on how blogs will affect future campaigns. We're big fans of Patrick's but this article far exceeded even my lofty expectations.
- Pat, 11:08 AM

I have tons of coverage of the Eason Jordan affair, the Ward Churchill fiasco, and a Super Bowl XL preview.
- Pat, 8:59 AM

The Washington Post published a misleading account of President Bush's plan to save Social Security. A "Social Security strategist type" wrote over to K-Lo at the Corner:

The Old Media has given us an uncritical regurgitation of the anti-reform crowd’s argument that needs to be debunked. Jonathan Weisman’s article on the Post is dead wrong. There is no “clawback” in the Social Security proposal the President outlined last night. The stuff about account balances and the amounts taken out is completely made up. People would own the entirety of their accts -- opponents are seizing on the fact that people would give up bennies up front to get the acct to sow deliberate confusion about a clawback -- which there is not. I don’t know if this is an example of a journalist being hoodwinked by the opposition, or a deliberate misrepresentation of the facts, but the truth is this is a basic actuarially fair offset. An offset is based on how much you put into your account, while a clawback is based on your account's end balance. With the second, all the risk and reward lie with the govt, which undermines the ownership element.

Correction to This Article
An earlier version of this article incorrectly described how new private accounts would work under President Bushs Social Security plan. This article has been corrected.

But wait, as Ron Popeil says, there's more, or should I saw Moore. The fat tub of goo waddles in with a post on Social Security this afternoon, which is taken from the original, uncorrected WaPo account (and posted after the correction), and gets mauled by the Ankle-Biters.

The Thrill of Victory

And the Agony of Defeat

Say Goodbye to the Photostrip Up Top!

Fortunately, Nuancy Boy doesn't find himself in the news media's cameras as often, so it's hard to find enough photos to keep it filled. And when one of them goes it's a pain in the neck figuring which one. Sad to see it go, though, it was one of the few things I did to make the site look a little more distinctive.
- Pat, 1:23 AM

Captain Ed owns the story. He came up with this:

"Actions speak louder than words. The reality is that at least 10 journalists have been killed by the US military, and according to reports I believe to be true journalists have been arrested and tortured by US forces," Mr Jordan told an audience of news executives at the News Xchange conference in Portugal.

Where's the next place the story is going? How about a list of all journalists killed in Iraq? Coming at Brainsters.
- Pat, 6:49 PM

I put up a fairly long post over at Brainster's on Kerry's problems with Christmas in Cambodia, along with a brief comment on Kerry's supposed gun-running to the Khmer Rouge.

Our friend Margaret points to Jim Geraghty's ruminations on the subject, via Hugh Hewitt.
- Pat, 11:59 AM

"I have great respect for John Kerry, but there's no question he did not articulate these [abortion] issues well," Feldt said in an interview. "He seemed equivocal. He ceded the moral high ground to the other side."

It appears that even Gloria recognizes that Kerry was lying when he said he thought abortion was wrong.
- Pat, 6:24 PM

Congrats to Patrick Hynes: Moving Up!

Our buddy Patrick Hynes, half of the writing team for the amazing Crush Kerry website (now rechristened Ankle-Biting Pundits in the wake of Kerry's flattening) is moving on up in the world. He's been tapped by the Cato Institute to spearhead their push for Social Security reform. This is a prestigious honor, and I can't think of a man more likely to get the job done. Congratulations, Patrick!
- Pat, 10:27 AM 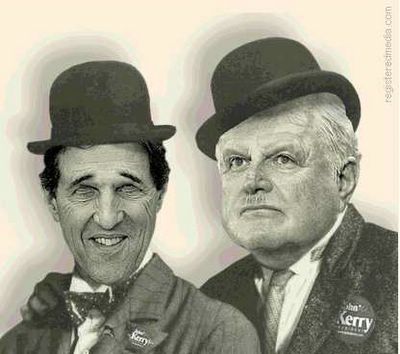 This Is Another Fine Mess You've Gotten Us Into

Our buddy Grant from Australia has finally joined the ranks of the living dead (aka bloggers), with his new blog, The Radical Conservative. Those who read Kerry Haters regularly during the election season remember Grant as a great source of news articles and I think we even posted one of his superb emails verbatim on the blog. Grant's writing has a little bite to it, as this example shows:

Well here they go again. The sycophantic hacks on the left who call themselves journalists lining up to back their next great white hope - The Bomber. I'll continue to add to this list as time goes on in what I suspect is an action motivated not through genuine support for the leader but just simply an outward loathing and hostility for the incumbent.


Great Day for the Iraqis, Bad Day for Le Fraude

I couldn't think of a scene more beautiful than that. From the early hours of the morning, People filled the street to the voting center in my neighborhood; youths, elders, women and men. Women's turn out was higher by the way. And by 11 am the boxes where I live were almost full! Anyone watching that scene cannot but have tears of happiness, hope, pride and triumph.

I bow in respect and awe to the men and women of our people who, armed only with faith and hope are going to the polls under the very real threats of being blown to pieces. These are the real braves; not the miserable creatures of hate who are attacking one of the noblest things that has ever happened to us. Have you ever seen anything like this? Iraq will be O.K. with so many brave people, it will certainly O.K.; I can say no more just now; I am just filled with pride and moved beyond words.


The turnout in Iraq was really like nothing that I had expected. I was glued in front of tv for most of the day. My mother was in tears watching the scenes from all over the country. Iraqis had voted for peace and for a better future, despite the surrounding madness. I sincerely hope this small step would be the start of much bolder ones, and that the minority which insists on enslaving the majority of Iraqis would soon realise that all that they have accomplished till now is in vain.

(Holds up the V sign with the purple index finger).

"It is significant that there is a vote in Iraq," Kerry said in an interview with NBC television's Meet the Press. "But ... no one in the United States should try to overhype this election.
- Pat, 7:34 PM

The purple finger revolution is spotted at Brainster's.
- Pat, 2:14 PM

Just Being Nominated is an Honor

But of course, winning is a greater honor still. So go over and vote for Kerry Haters at the Smoke Signals Forum as the blog that "did the best job (overall) in 2004". Registration required to vote, but it's a painless process. While you're at it, check out the Smoke Signals blog.
- Pat, 10:27 AM

Abortion Should Be the Rarest Thing In the World?

Russert Doing a Solid Job, Fails to Go for KO

Nails Kerry down fairly well on the Christmas in Cambodia story. Kerry commits to being five miles over the border. Unfortunately, he doesn't hit Kerry with the tough follow-up.

Example: He had the form 180, why not ask Nuancy Boy to sign right there and now? Kerry sucks up to Dean and the Deaniacs. Lots of folks going after those votes: Gore, Kerry, even Evan Bayh.
- Pat, 7:30 AM

Painless, "I Take Responsibility for Mistakes"

Note the lack of specificity on mistakes, the very specific things his campaign did right? Says he was rising in the polls prior to the Osama tape, then flatlined and started declining.

Good point on beating the spreadsheet models. But the stupid comment about if half the people at an Ohio State football game had changed their minds is ridiculous.

Russert tags him on the Rice vote.

Continues to insist "Unfit for Command" was full of lies and smears. Christmas in Cambodia! Waaaaahoooooo!
- Pat, 7:15 AM

Back on the Foreign Leaders Schtick

Foreign leaders telling him a lot of things. Called for Rumsfeld's resignation. 800,000 of his supporters signed a petition.

Doesn't agree with Kennedy on removing 12,000 troops immediately. Says we shouldn't have a specific timetable. Good for him. Of course, if we'd listened to Kerry in the fall, we'd be able to have a timetable. Arrggghhhh! So glad we won't be listening to this twit for the next four years.
- Pat, 7:10 AM

Live-Blogging Kerry on Meet the Press

But monkey start. Reports are encouraging, but...

Brings back the Apology tour. Waaaaahhhh!

Coming up in a few minutes. Although speculation is that Russert will go easy on Kerry, my guess is that Kerry gets some tough grilling.
- Pat, 7:05 AM