I want to wish all the readers of this site (blue and red alike) a very wonderful CHRISTmas this year. Even though Christ was not born on December 25, celebrating the birth of the world's Savior at the end of the year allows us to reflect on the many blessings He has granted us.

First, the Author of HIStory that lived and died to liberate humanity from the bondage of this earth--allowing for equality amongst souls--blessed us with four more years of a man who understands that freedom is not America's gift to the world but God's gift to all mankind.

We are so blessed to be a nation that can come together in the spirit of free markets, republicans and democrats, supporting our nation's entrepreneurs by shopping until we drop and giving gifts to others bought with the blessing of continued prosperity for our country.

As Americans, we also love our friends in other countries and pray that their blessings are also abundant. CHRISTmas reminds us, however, that we must also pray for our enemies. We must pray feverishly for the citizens of France, Germany and members of the United Nations.

I don't know if aetheists or anti-Christians can understand the very intense and personal love that many, many Christians feel toward others. And this love is not sanctimonous or "corny." I hope that everyone that reads this site is blessed during this rememberance of the Christ's birth with a quietude of the soul that allows for reflection and joy.

Pat, Kitty, Gayle, Paul, Mike G., doubleu, Ghost Dansing, conservanatrix, "anonymous," etc., I love you and everything you've done to contribute to this site and to the civics of America. And to all the readers that are interested in knowing more about why Jesus' birth as the Christ and how His sacrifice will allow you to personally know God (literally, as you know people you see everyday), let me know and it would be a great CHRISTmas present to me just for the opportunity to share such good news with you.

>>and if you're wondering about the all caps in "CHRISTmas," read my post here.


Man of the Year: John O'Neill

Okay, it's Human Events, which released several chapters of Unfit for Command on-line, but it's still good to see somebody honoring Mr O'Neill, who, while still recovering from donating a kidney to his wife, did a phenomenal job of being the principal spokesman for the Swift Boat Veterans for Truth.

The abuse kept coming. On PBS's NewsHour, Boston Globe columnist Tom Oliphant declared that O'Neill did not meet the standard of clear and convincing evidence. "Almost conclusive doesn't cut it in the world's parts of journalism where I live," sniffed Oliphant. In fact, John O'Neill had interviewed some 60 people, compiled more than a dozen affidavits, and assembled a body of facts that put the Kerry campaign on the defensive, no matter how much the media tried to shield Kerry and fight on his behalf.

In the end, no amount of liberal propaganda could negate the plain facts assembled by O'Neill. All the slights, tantrums and tirades of the liberal media couldn't besmirch O'Neill's integrity. His efforts helped turn the tide of the presidential election.

Indeed. There is little doubt in my mind that without John O'Neill and the Swiftees, the media today would be referring to John F. Kerry as "President-Elect".
- Pat, 8:44 PM

From Alpha Patriot we get this great little tune:

W, the Republican reindeer
Had a very political nose.
And if you ever met him
You'd be amazed at what he knows.

All of the Democrat reindeer (and liberal media)
Used to trade snickers and nudges.
They never let poor W
Appoint any conservative judges.

Are Red Staters really the uneducated rubes that so many beautiful Blue people make them out to be? Maybe. But Oklahomans, Hoosiers, and Idahoans have at least one thing over their well-educated New York counterparts — they can at least spell their presidential candidate's name correctly.

According to the official documents displayed on the website of the National Archives, the Empire State's 31 electoral votes all went for someone named "John L. Kerry" from Massachusetts. No such person could be found in the phone book, although there is a John T. Kerry in Plymouth.

New York Deputy Secretary of State Eamon Moynihan was audibly surprised when the mistake was pointed out to him over the phone. "It was a typo in Albany," he explained later in the day, after looking into the matter. "It will be corrected — a corrected version will be sent with an explanatory note," he said.

This electoral-college mistake was not the only one for 2004. The press has widely noted that one of Minnesota's ten electoral votes was not cast for Kerry. However, the write-in electoral vote for president did not go to John Edwards, as was widely reported, but instead for someone named "John Ewards."

— David Freddoso is a political reporter for the Evans and Novak Inside Report. 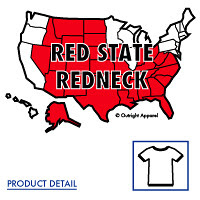 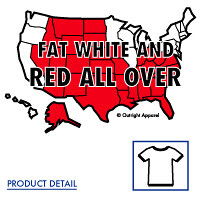 The Man reports on Blue State Bigotry On Sale:
I wonder if they are having problems moving their products, since they had to cut prices 25%?

In Defense of John L. Kerry
The buzz today is that John Kerry is an idiot and a loser. Glenn Reynolds, links to a guy, who links to the Daily Kos, who says John Kerry “should be lined up a shot” for “idiocy.”
This is unfair to John Kerry. For the record, we don’t like John Kerry. He is a liar, a coward and, yes, an idiot. But it is unfair to say he conducted a bad campaign.
…
Look, I was in Washington, DC on Election Night when everyone in America thought John Kerry had won the thing. Democrats all over town were cheering and celebrating. They were jockeying for position to kiss John Kerry A$$. They were measuring the drapes in the Oval Office, for crying out loud. He wasn’t an “idiot” or a “loser” then.

MEL GIBSON PAYS FOR OUR “SINS”

Oscaring Mel Gibson
By Patrick Hynes
Both the Golden Globes and the Broadcast Film Critics passed over The Passion of The Christ for any major nominations this year. The American Film Institute made no mention of The Passion in its 2004 best films of the year announcement. And according to USA Today's Oscar Oracle, The Passion isn't on the radar screen for even a single nomination when the Academy of Motion Picture Arts and Sciences hands out nominations at the end of January.
…
What's going on here? Well, the cultural elites took a whooping on Election Day, 2004. And they are taking it out on Mel Gibson.
The official reasons for denying The Passion an Oscar nomination are fivefold. Herewith, I will attempt to discredit them all:

The Passion is just a sadomasochistic bloodbath with quasi-religious overtones.
The Academy doesn't do religious films.
The Passion just reflects Mel Gibson's obscure brand of extreme Catholicism.
The factual errors disqualify the film for any nominations.
The Oscars don't do foreign language films. 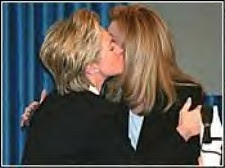 The Ghost of Christmas-Future
By Peter Hannaford
WASHINGTON, D.C, December 22, 2009 -- Both houses of Congress passed the Freedom From Religion Act last night just in time to adjourn for what is now being called the Winter Solstice recess. President Hillary Rodham Clinton says she will sign the bill "as soon as it gets to my desk."
…
"If we had not made this change, non-Christians might have had to work on what was essentially a religious holiday," said House Speaker Nancy Pelosi.
In the military, members of the chaplain corps will be reassigned to non-religious duties, with the exception of Muslims. "They are a special case," said Senator Ted Kennedy.

And we are already doing a good job, so says Rasmussen Reports:

December 13, 2004--If the next Presidential Election were held today, 46% of voters would vote for a generic Republican candidate over Senator Hillary Rodham Clinton. A Rasmussen Reports survey found that 39% of voters would cast their ballot for Senator Clinton.

The New York Senator holds a narrow 45% to 42% lead among women, but trails by 17 points among men.

The national telephone survey of 1,500 Likely Voters was conducted by Rasmussen Reports December 3-5, 2004. The margin of sampling error is +/- 3 percentage points with a 95% level of confidence.

An earlier Rasmussen Reports survey found that 42% of Democrats believe that Senator Clinton is the Democrats' strongest candidate for 2008. Other survey data shows that 51% of Democrats want their next Presidential candidate to be more of a centrist than John Kerry.

Rasmussen Reports is an electronic publishing firm specializing in the collection, publication, and distribution of public opinion polling information.

Our publications provide real-time information on consumer confidence, investor confidence, employment data, the political situation, and other topics of value and interest.

Our Special Report on Election 2004--The GOP Generation--2004 Edition--shows that Republicans now have the potential to control Congress and dominate the political landscape for decades. To achieve this goal for his party, the President must first successfully resolve the situation in Iraq.The GOP Generation is provided free to Premium Members and may be purchased for $25 by non-Members.

During Election 2004, RasmussenReports.com was the top-ranked public opinion research site on the web. We had twice as many visitors as our nearest competitor and nearly as many as all competitors combined.

Scott Rasmussen, president of Rasmussen Reports, has been an independent pollster for more than a decade.

Kitty posted below the article about the Power Line gentlemen who were chosen as "Blog of the Year" by Time Magazine. But check out the first response to this article on Lucianne.

"Also, I think our own Brain Death and Kitty were worthy of consideration for blogger of the year, given the fact that they scooped the world on the Christmas in Cambodia story."

(Brain Death is my "nick" on Lucianne).

Thanks for the mention, MFCB! He's got his own excellent blog over here.
- Pat, 9:22 AM

Local site a top dog in Web logs
Minneapolis lawyer John Hinderaker suggested to Johnson, his writing partner, that the pair use the Internet and the emerging medium of Web logs, or blogs, to publish pieces on the economy and politics.
While Hinderaker thought his suggestion was brilliant, Johnson was less enthusiastic: "He said, 'I think the idea that we could ever have any readers for this thing is a pathetic fantasy,' " Hinderaker said with a chuckle on Sunday.
…
"In 2004, blogs unexpectedly vaulted into the pantheon of major media, alongside TV, radio and, yes, magazines, and it was Power Line, more than any other blog, that got them there," said the Time story, on newsstands today.
…
"We're all former liberals," he said. "That's something that gives us a sense of urgency. We've seen the other side, and that's part of what motivates us to defeat it."
…
"It's always been true that there are people all over the country that have bits of information, but until the Internet came along there wasn't any way to put it all together," Hinderaker said. The "60 Minutes" story revealed the Internet's power to quickly assemble a story from a multitude of sources, he said.
…
Time managing editor Jim Kelly said in an interview posted on IWantMedia.com that blog users are the type of readers he seeks out.
"I read a lot of blogs," Kelly said. "And a lot of people who blog are the readers I want. These are people who are skeptical about what they hear and don't buy the conventional wisdom. And that is a big part of what I'm about and what I'd like to think Time is about."

As a black man, I have never been more disgusted than by this article here that portrays the most DUMB, INCONSIDERATE minorities ever.
- Aaron Matthew Arnwine - LifelikePundits.com, 6:35 PM 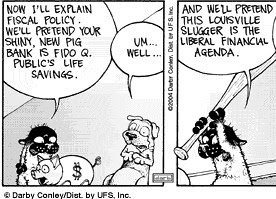