Well, these are actually just cherries.

United Nations anti-torture body has criticised Britain for the "unsatisfactory" conditions in its prisons, including a "substantial number of deaths in custody", urging it to act at once to improve them.

The U.N. Committee Against Torture, reviewing British compliance with an international treaty outlawing inhuman and degrading treatment, also expressed concern at parts of an anti-terrorism law which allows "potentially indefinite detention" of foreigners without trial.

It called on the British government to study "as a matter of urgency" alternatives to the sweeping powers to imprison any foreigner suspected of involvement in international terrorism given by the 2001 Anti-terrorism, Crime and Security Act...

I hope the British people wake up and realize that the UN is against sovereign democracy and not just against the US and Israel. Read the rest here.
- Aaron Matthew Arnwine - LifelikePundits.com, 1:14 PM


The Smallest Group on the Planet

Sen. John F. Kerry plans to file the paperwork this week to establish his Senate re-election campaign committee, called "Friends of John Kerry", keeping the door open to running again for his seat in 2008.
- Pat, 8:37 AM

Inside Politics
By Greg Pierce
A rude awakening
"From the days of Franklin Delano Roosevelt, and especially after the disputed election of 2000, Democrats operated on the premise that they were superior in numbers, if only because their supporters lived in such concentrated urban communities.”
….
"Not anymore. Republicans now have their own concentrated vote, and it will probably continue to swell."

The Comedown Kid
"No one is talking about it, but Bill Clinton might be this year's biggest political loser," Eric Pfeiffer writes at the Weekly Standard Web site, www.weeklystandard.com .
…
"Practically everyone in Washington has heard the numbers: A $165 million facility, 80 million pages of documents and 14 separate wings dedicated to Clinton's eight years as chief occupant of the White House. However, the number no one is talking about when it comes to the Clinton legacy is zero," says Mr. Pfeiffer, who is a senior writer for National Journal's Hotline.
…
Every candidate that Clinton endorsed, raised money for, or conducted a campaign appearance on behalf of, lost. Tossup Senate races in which Clinton appeared all went against the Democrats: Betty Castor in Florida, Chris John in Louisiana, James Hoeffel in Pennsylvania and outgoing Senate Minority Leader Tom Daschle in South Dakota. In swing states where Clinton put in appearances, such as Arizona and his home state of Arkansas, Kerry also lost."

For all of you other Kerry Haters out there (AKA Bush Lovers) here is something to represent the thanks we are giving: 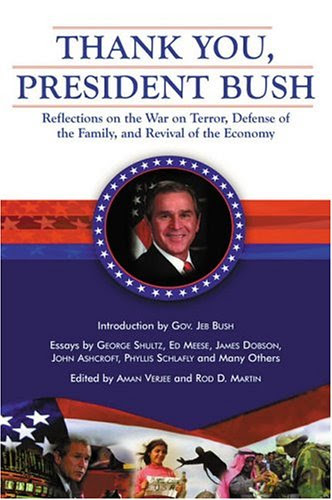 Life and Death in an Instant

Bill at Small Town Veteran has an interesting email from a Vietnam vet regarding an incident in Vietnam where the soldier had to make a split-second decision. Great anecdote.
- Pat, 11:27 AM

TODAY WE GIVE THANKS

For the re-election of President Bush

and for Lorie Byrd’s daughter’s successful surgery yesterday.
Each of us has an endless list of blessings, whether we may realize all of them or not. To begin with we live in America.

Pat, Kitty & Aaron wish you all a Happy Thanksgiving!


BE STILL OUR 62 MILLION HEARTS

Go Ahead, Make Our Day - John ''Crushed'' Kerry Seriously Considering 2008 Run
If Santa Claus is checking his list and checking it twice, it appears that we here at crushkerry.com, as well as our readers, have been very nice. What are we talking about? Well, if one is into reading some very early tea leaves, it actually appears that we might, just might, have John Kerry to kick around some more.


On CrushedKerry’s home page:
A Heartwarming Story (For Real) Our friend Lorie Byrd, who also writes for Polipundit has a terrific story today on her site Byrd Droppings about a a very special child whose visit to the White House showed just how good a man George Bush is. Again, we don't just mean a good "President", but also a great human being.

Prayers for Lorie's Daughter Also, as stated on Byrd Droppings today, Lorie's daugther is once again having surgery. So join us in keeping a special thought for Lorie and her family.

This from Mark Steyn:

Anyway, after a week of trying to turn the Democratic whine into holy water, the House minority leader decided to chuck the saint-dropping. As the whole Jesusland thing suggests, her base isn't entirely on board with the outreach. And frankly the Democrats never do well when they try to square contemporary liberal pieties with religion. For one thing, they recoil from the very word "religion." Al Gore prefers to say, "Well, in my faith tradition . . ." As a rule, folks with a faith tradition tend not to call it such. At Friday prayers in Mecca, the A-list imams don't say, "Well, in my faith tradition we believe in killing all the infidels."

Second, prominent Democrats seem to have great difficulty getting even the well-known bits right. Christmas, according to Hillary Rodham Clinton in 1999, is when those in that particular faith tradition celebrate "the birth of a homeless child." Or, as Al Gore put it in 1997, "Two thousand years ago, a homeless woman gave birth to a homeless child." For Pete's sake, they weren't homeless — they couldn't get a hotel room. They had to sleep in the stable only because Dad had to schlep halfway across the country to pay his taxes in the town of his birth, which sounds like the kind of cockamamie bureaucratic nightmare only a blue state could cook up. Except that in Massachusetts, it's no doubt illegal to rent out your stable without applying for a Livestock Shelter Change of Use Permit plus a Temporary Maternity Ward for Non-Insured Transients License, so Mary would have been giving birth under a bridge on I-95. 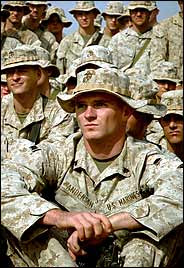 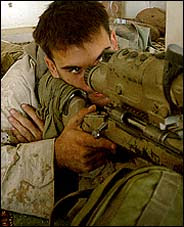 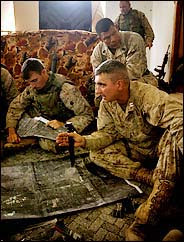 Find out the story of these heros here.
- Aaron Matthew Arnwine - LifelikePundits.com, 7:45 PM

Starting with the economy.

Kerry: I Would've Broken a Nail

"Because it is hard!"

Kennedy knew the challenges we could tackle. With Bush in office we can tackle even more. Read about our final frontier (no, not Fallujah) here.
- Aaron Matthew Arnwine - LifelikePundits.com, 6:56 PM

Read all about it here. Also, do you think we've actually thwarted many more attacks we won't learn about for fifty years? Comment both here and on my site. Thanks!
- Aaron Matthew Arnwine - LifelikePundits.com, 6:37 PM

my beagle's full name is: Red Baron of the Dutch Pilots. Who can guess what inspired that name? There are three correct answers.

That's my beagle, Dutch, that I rescued from the pound 18 months ago. But I really want to focus on this amazing piece written by a Dutchman entitled: Europe, Thy Name Is Cowardice.

I believe that some (not all) people are waking up to the fact that Bush is not the Hitler he is made out to be and that they know that the American people are wise and trustworthy--and to now condemn Americans instead of a scapegoat like George W. Bush doesn't bode well in the hearts of many.
- Aaron Matthew Arnwine - LifelikePundits.com, 5:59 PM

Did Andrew Sullivan Drop His Load?

He seems to be gaining his senses in the way a man does after he shoots his wad. He offers the most sober analysis of this past election and the cultural divide that may not even exist.
- Aaron Matthew Arnwine - LifelikePundits.com, 5:50 PM

Check out this post from a Marine in Fallujah.
- Aaron Matthew Arnwine - LifelikePundits.com, 4:58 PM

Whatever Happened to the Barn Jacket?


Your Thumb Should Be Wrinkled

By the time you finish reading this all-day sucker from the NY Times Magazine on the get out the vote effort by the Democrats in Ohio. The article focuses on Americans Coming Together, which, despite the name, is not some massive Cristo piece of sexual performance art. It's a 527 organization, one that the writer mistakenly calls, "the most important and perhaps most controversial group to emerge from the new galaxy of independently financed organizations commonly known as 527's." Of course, the most important and the most controversial 527 was surely the Swift Boat Veterans for Truth.

But the rest of the article is pretty fun to read, much in the way that I enjoyed reading the chapter of Johnny Unitas' autobiography concerning Super Bowl III, with the knowledge that the person being focused on is heading for a train wreck.

We all moved on to Champps for lunch, where Rosenthal got a call from his office on his cellphone and began taking down the numbers from the first wave of exit polling. Kerry was up by 4 points in Ohio and Florida. He led by 12 in Pennsylvania. ''These look great,'' Rosenthal told Lindenfeld and Bouchard. ''I'll take these.''

I am continually amazed by the way the Democrats (and many left-leaning writers) seem to have completely been blinded to reality. If somebody had said Kerry was up by 114 percentage points in Iowa, would they have been high-fiving? Or would somebody have said, "Wait a minute, that's not possible!"

The three men wondered why it was that they hadn't seen much evidence of the vaunted Republican turnout effort. The ''vote challengers'' that Republicans had successfully appealed to the courts to allow into the polls had never shown up. Field offices weren't detecting any sign of Bush canvassers on the streets or at the polls. It was as if all this talk about the Republicans' volunteer-driven machine had been some kind of a strategic feint rather than an actual plan.

On the way back to headquarters, where he would say his goodbyes before returning to Washington, Rosenthal saw two ACT workers standing in the rain, shielding their Post-it notes under their ponchos. He rolled down the window. ''Hey guys, great job!'' he said. ''Keep up the good work!'' The volunteers waved. ''Have you seen any Republicans?'' Rosenthal asked. ''No? They gave up, I guess. They're all back in Crawford, at the celebration.''

Read it to the end, and you'll get to gems like this:

A quiet disbelief descended on the room. You could hear the creak of a folding chair, a ringing cellphone, the intermittent sob. ''This is the end of the United States of America,'' I heard one man declare as he left the room.

The volunteers who had been watching the numbers on a laptop refused to accept what was happening; they decided it was Brokaw's fault, because he had put Ohio into Bush's column, while CBS was still calling it even. Cursing Brokaw, they abruptly flipped channels to Dan Rather instead, causing a minor uproar. ''Folks, the reason we changed the channel is because NBC is the only network that called it!'' one of the frustrated volunteers shouted.

Bouchard, watching this unfold from the back of the room, recognized the desperation for what it was. ''I hear the PAX network hasn't called it either,'' he said sardonically. ''Let's put that on.''

For Democrats, this new phenomenon on Election Day felt like some kind of horror movie, with conservative voters rising up out of the hills and condo communities in numbers the Kerry forces never knew existed. ''They just came in droves,'' Jennifer Palmieri told me two days after the election. ''We didn't know they had that room to grow. It's like, 'Crunch all you want -- we'll make more.' They just make more Republicans.'
- Pat, 8:46 AM